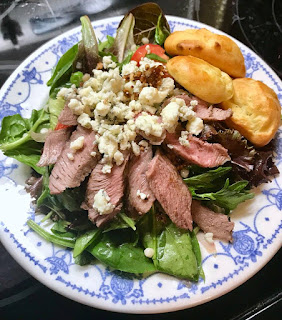 This was my first time making Gougeres. I can't really justify spending the cash on Gruyère so I substituted a hard Swiss cheese. The recipe called for a 475 oven. Way too hot so I began at 425. Still too hot. The first batch didn't puff. Reduced to a 425 convection...perfect.

As for the cooking method known as Arroser, or butter basting, this was also a first. I had center cut lamb leg. Added sprigs of fresh rosemary (I seem to grow a lifetime supply) and one garlic bulb halved. Oh and tons of butter. Maybe I was just lucky but the results were quite nice.

Moral of the story is, whatever your interests, push the limit. Great way to learn and in the world of cooking, you get eat the rewards.
Email Post